Well, the snow that we got this weekend is so rare it's supposed to only happen twice a century. Because of that, I'm re-posting this picture from last year. Boy, was that fun!

The other reason why I'm posting it again is because that picture has now become my very first picture ever to be published for money :biggrin:

Look for it as part of a Subaru of America ad campaign appearing on April 25 and April 30, 2008 in the USA Today.
Posted by Stargazer (original profile) at 10:47

Search this site with Google

Please visit my Gallery: instacanv.as/istargazer
Hello! I'm glad you could drop by. This site started as somewhere for me to post pictures of the vehicles in my garage, but now includes other pictures I have taken over the years.

The 2006 Subaru Impreza WRX STI and the 2006 Honda Odyssey Touring, have been replaced with a 2007 GMC Yukon XL Denali. The 2005 Suzuki Burgman Type S still remains as my commuter vehicle. My brother (who owns a VW R32) and I blog about all our cars and other things over at Stargazer's Garage so please come for a visit and leave a comment when you get a chance. 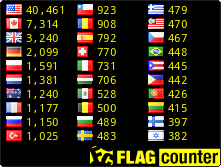 The latest from Stargazer"s Garage...

This work is licensed under a Creative Commons Attribution-Noncommercial-Share Alike 3.0 United States License.